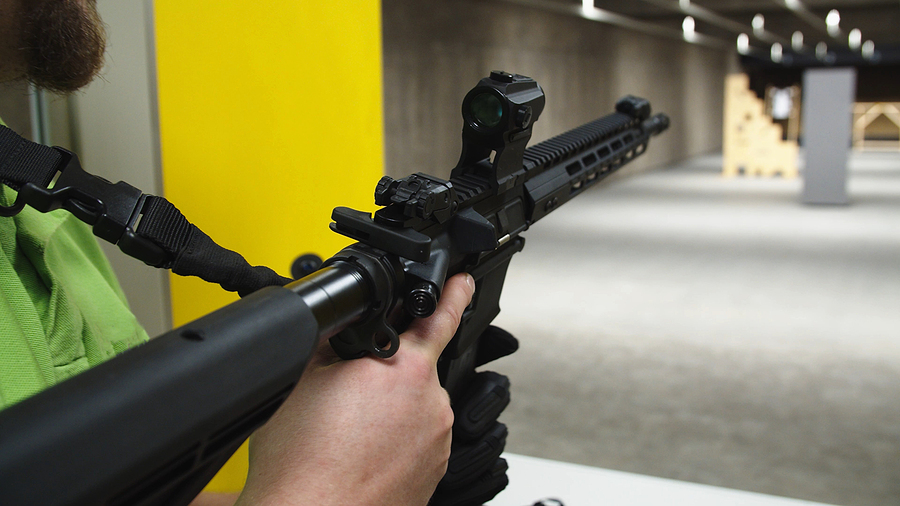 When you’re riding up to a Las Vegas gun range, what are you carrying? Some are packing a pistol, while others are ready to rock with a rifle. Both firearms offer a fun challenge for those who want to rule the range, and both feature inherent advantages that make them fantastic resources for a number of applications. Although we have machine guns at our Las Vegas gun range, many of our visitors enjoy switching between pistols and rifles to improve their marksmanship.

We’ve overheard a lot of chatter at our Las Vegas gun range about the pros and cons of certain firearms. Shooters from all walks of life are constantly debating the merits of each, so much so that we thought we’d weigh in on both sides. We’ve created this quick guide, along with fun facts, comparing the performance of each firearm. So that all of shooters that are headed to our Las Vegas gun range are more knowledgeable about these popular firearms.

Handling
The weight of rifles and pistols vary greatly, with most handguns being significantly lighter than long guns. Although this may make a shooter feel more comfortable about choosing a pistol, a rifle actually has better handling, especially on a Las Vegas gun range.

The heavier weight of a rifle helps with its recoil management. They’re also easier to fire because they have more anchor points to your body. Compared to a pistol, which even with two hands offers limited anchoring, positioning the rifle against your shoulder pocket helps support control of the firearm.

Range
Shooting at a Las Vegas gun range is quite fun, especially when you can challenge your accuracy from a variety of distances. Although anyone can attempt to hit a far-away target with a pistol, rifles will almost always beat out range compared to handguns. Even those who are well-trained with a pistol will actually lose accuracy when speed firing at shorter distances, compared to rifles. If you’re trying to hit a mark at a far distance, even inaccurately, a rifle will offer the best range.

Power
If range isn’t the most considered aspect on a Las Vegas gun range, then firepower is. Who doesn’t love blasting their way through paper targets or skeets? The long barrel of rifles allows each bullet to gain more velocity, creating a more powerful shot. However, if a barrel is too long, friction could also cause a loss of velocity.

Ammo
Before we highlight a few differences, many shooters will be pleased to know that there are a variety of pistols and rifles that can load up with the same caliber of ammunition. Pistols like the .45 Colt, .357 Magnum, Taurus Judge and .30 Carbine can all be fed certain ammunition that is more commonly used in rifles.

In terms of ammo capacities, many states do not have laws regulating the use of large capacity ammunition magazines, which is great for those firing on a Las Vegas gun range. A bolt action rifle is typically manufactured with a four to ten bullet magazine, while many factory-produced pistols are made with magazines that hold between six and eighteen rounds. Because rifles and pistols each have a number of ammunition options and capacities, we don’t believe one has an advantage over the other.

Home Defense
With so many homeowners choosing to protect their property with a firearm, it’s helpful to know the pros and cons of each when used outside of a Las Vegas gun range. While firepower and distance are important for shooting targets, home safety doesn’t necessarily rely on these qualities. Pistols are compact, easy to carry or conceal and only require a single hand to shoot, if necessary. Although rifles have more firepower and distance capabilities than pistols, they are harder to maneuver in small spaces and require two hands for use.

Fun Factor
Admittedly, it’s hard to objectively judge the fun factor of any firearm on a Las Vegas gun range. Some shooters do find one class of firearm to be more preferable than another, but even if an individual prefers pistols to rifles or vice-a-versa, it’s usually because they’ve taken a liking to a specific model. The thrill of discharging an entire clip on a quickdraw, is just as exciting as hitting a series of targets from varying distances. When it comes to firearms, the level of fun changes from shooter to shooter.

Fun Facts About Pistols & Rifles
Next time you stroll into a Las Vegas gun range, come loaded with a few bits of cool trivia:

Pistols vs Rifles: Try Them Both on Our Las Vegas Gun Range
When it comes to the debate between rifles or pistols, our Las Vegas gun range believes that you shouldn’t need to choose one or the other. Las Vegas Shooting Center invites you to schedule brass therapy sessions and unload hours of fun with both of these powerful firearms. Grab your friends or fly solo and take aim at a safe and exciting experience at our indoor Las Vegas gun range.

Our Las Vegas gun range features a vast selection of rifles and pistols that are yours to enjoy, while presenting you the opportunity to see for yourself on which pistol or rifle you prefer. Give us a call today to learn about all of our packages or stop in and speak with one of our helpful Las Vegas gun range associates.