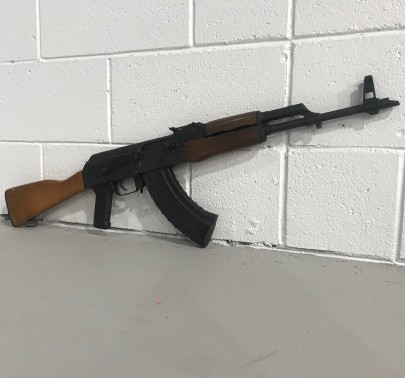 The ubiquitous AK-47 and its follow-on family of guns, are perhaps the most recognizable individually carried firearms in the world. Even those who have a dislike for firearms can recognize the solid profile of the AK-47 and most of its derivatives. It is used by almost every villain in television and silver screen productions, as well as being commonly seen in videos and still photos of conflicts around the globe. So what is it about this firearm that makes it so popular, and why is it used by good guys and bad guys alike?

In The Beginning
To understand the AK-47, you have to go back to 1945. The war was just over and the ruins and devastation was still smoldering across Europe, with a large number of swaths in the Soviet Union being laid to waste. There was a big desire to address some of the problems identified during the war, so they could prevent such an event from ever happening again. One of the problems was how to put more firepower in the hands of the individual soldiers. While the guns of that time were effective, there was need for something better, in which the search for a new individual handheld firearm was born.

The Legend Arrives
Although disputed by some historians, legend has it that a small-time tinker realized there was a need for a new firearm. The individual worked on and developed what would become known as, the Avtomat Kalashnikova. Laboring night and day to perfect his new gas-operated machine carbine, Mikhail Kalashnikov finally perfected his new design and had it accepted by the Soviet Union in 1947, hence the name AK-47. While the legend is fun, it is most likely that a team of engineers worked on developing this new design. Many countries followed similar concepts in the late war period, with Germany introducing a similar style firearm. But one thing is for certain, the AK-47 quickly gained traction in the post-war period.

You Get A Gun and You Get A Gun…
At the beginning of the Cold War, the Soviet Union made the effort to supply ample arms and equipment to guerrilla movements and insurgency campaigns all over the world. This quickly lead the AK-47 in becoming one of the most prolific firearms of all time. The AK-47 was cheap and easy to mass-produce, with the ammunition being just an intermediate cut down cartridge from the previous rifle cartridge, so it didn’t require a large amount of development. On top of being very easy to understand and operate, from Angola to Vietnam, the AK-47 could be supplied quickly and was less expensive compared to other firearms.

The Firearm That Takes A Beating
No matter how cheap a firearm is, if it isn’t reliable and effective, no one is going to want one, much less use it to the degree of an AK-47. What makes the AK-47 really stand out is that it is extremely reliable. The furniture and wood pieces of the gun are solid and sturdy to help balance the gun against the generous firepower it has coming out of its end. Its mechanism was often stamped or pressed with mid to low-quality steel, with working parts tolerances that were often considered to be too loose, attracting a questionable reputation to German engineers during that time. However, everything came together and made the AK-47 very capable in terms of reliability. It could be used in any weather, it also needed only a small amount of maintenance to keep it running or could be tossed or laid down in the mud, and the gun would still fire it as if it came off the shelf.

But Can You Hit Things With It?
Besides being reliable, the AK-47 is also an effective gun, putting a large number of rounds down the range and doing it accurately. Naturally, it didn’t have the accuracy you would expect from a scoped firearm at 1,000 yards, but that wasn’t what it was designed to do. It was designed to provide the solider with a means to effectively engage the enemy, and that was exactly what it did. However, it also had the benefit of being reasonably light along with its standard magazine carrying a generous number of rounds. The fact that the intermediate 7.63X39 mm cartridge was light enough to be carried in sufficient quantities for a reasonable engagement; simply put, put a lot of bang for the buck.

It’s Just Fun
While most national armies have moved on to newer firearms, some derived from the original AK-47; the AK is still one of the most exciting guns to shoot. While there isn’t much else that instills the joy of sending thirty angry bees downrange in less than a few seconds. Or watching the paper fly as that occurs, as Clint Eastwood referred to in the movie, “Heartbreak Ridge”, the AK-47 has a distinctive sound when fired, which just adds to the fun.

Now that you know more about the AK-47, now is the time to take the plunge and try it out for yourself. Come try the AK-47 and other automatic firearms at Las Vegas’s best shooting experience. With package offerings for both large and small groups, the experts at the indoor shooting range Las Vegas Shooting Center will help you even if you have never fired a firearm before! Come experience the thrill and adventure. Contact the Las Vegas Shooting Center today and let us set up the experience that is right for you.