Benefits of Taking Your Child to the Indoor Shooting Range

With firearms being overly saturated in today’s media, such as movies, video games and TV shows, now is a better time than ever to start teaching the basic fundamentals of shooting to children in the family. Any child who has played the popular video game FortNite, would be able to tell you what the FN SCAR-16 looks like, and maybe sounds like. However, that rifle shoots a 5.56mm and even though it has moderate recoil, it can still be hard to handle – not to mention dangerous – in the untrained hands of a child. So, what better way to teach a child how to shoot a rifle or pistol than by their parent or guardian at an indoor shooting range?

Reasons to Take Your Children to an Indoor Shooting Range

Aby Rinella posted an article on 11 reasons why she takes her two kids shooting, both under the age of 10. In the article she explains some pretty valid reasoning as to why she does it. The first reason is that it is no one else’s responsibility to teach their child how to shoot other than their parent or guardian. Sure, there are training sites where an instructor teaches, but a parent solidifies that training with one single person who will be there every chance they get, plus it is someone familiar. 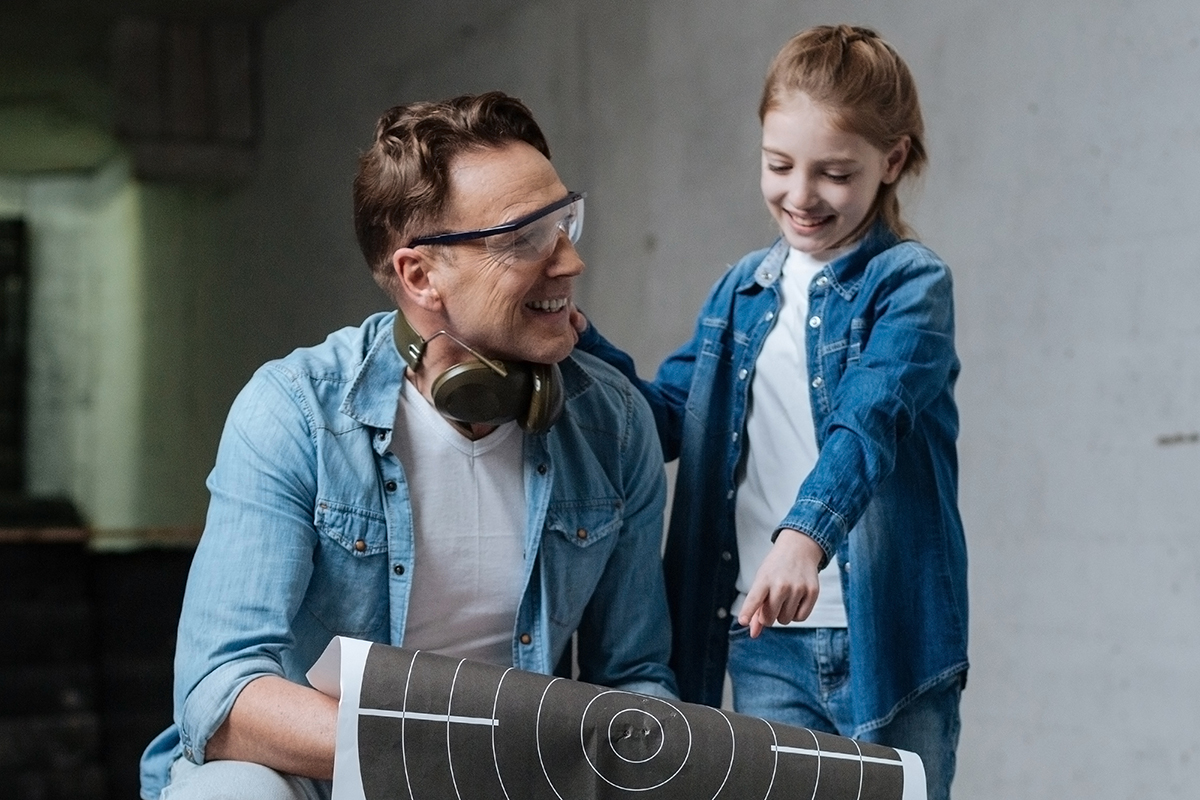 Another reason is that children should not live in fear of something that they can learn about. Shooting is a learned skill, and it is also a perishable skill that has to be maintained, which means fear should not be a factor in training. Instead, it should be a level of respect.

Considering that shooting is 90% mental and 10% physical, taking younger kids out shooting helps clear their heads from the ever-changing environment, where no matter what stance someone takes politically, the constant badgering of both sides gets annoying. Shooting is proven to help release stress and build hand eye coordination, as well as other health benefits, such as strengthening hand muscles while getting used to the recoil and helping to build better posture with proper shooting stance.

With so many families being stuck at home, many have been looking fun activities they can get out of the house and do together, which is why shooting as a family is one of the best activities on the market. Not only can it be great for training, but also cross training is some of the best types of training.

Speaking of training, shooting also builds other kinds of good habits; one in particular would be having a keen sense of awareness. The shooter must be aware of what’s going on to the left and the right of them. It is easy to pop off a few rounds in a single direction at a range designed for just straight shooting, but many ranges now a days have shooting and moving drills, where the shooter has to shoot the target and then turn to move while looking for their next one, all while having safety at the forefront of their session.

Challenges and healthy competition are among the reasons to teach kids the basics of shooting. As adults, shooting challenges escalate to doing a whole lot of physical training, grabbing the pistol off the ground, loading it, and shooting a 4-inch target at 25 meters. Challenges for kids are much simpler, like shooting the same target in the same spot 5 times or shooting that target and transitioning to the next one close by. These kinds of challenges promote a sense of accomplishment and maturity and can build that notion of competition.

Bring Your Child to LVSC to Hone Their Shooting Skills

Las Vegas Shooting Center has shooting packages designed for the younger ones, and Range Safety Officers there to help every step of the way, with room to advance. Our indoor shooting range is clean and large enough to accommodate the whole family while adhering to social distancing guidelines. Contact us at 702-778-5872 to reserve range time.