Famous Firearms from the Movies that You Can Shoot at LVSC

Nothing is more attractive than accurate portrayal of firearms and shooting in movies and TV shows, let alone video games, from films such as The Good, the Bad and the Ugly, all the way to John Wick. Firearms and movies go hand-in-hand, so how would it be possible to get one of those fantastic works of art in-hand? Las Vegas Shooting Center has a wide selection of firearms that have been featured in hundreds of movies, TV shows and video games.

A fan favorite at LVSC, the HKUSP handgun was featured in movies such as Blood Diamond and Tomb Raider, as well as video games and the popular spy show 24. Not to mention nearly every professional player of Counter Strike used that pistol for their character in that game.

Naturally, the 1911 is always a popular pistol, seen in countless World War 2 movies, from We Were Soldiers, Wonder Woman and Letters from Iwo Jima. As for video games, the insanely popular Battlefield 1, Call of Duty World at War and nearly every game with pistols as an option have some sort of variant of the famed 1911.

Especially popular in 90s movies, the Beretta M9 pistol was most famously used in Lethal Weapon, which featured a lot of cinematic shooting and was even praised by the one and only Mel Gibson. The M9 was even picked by the U.S. Army as the standard duty pistol, not because Mel Gibson said so, but because of its reliability. This pistol was even featured in Bad Boys and Bad Boys II. 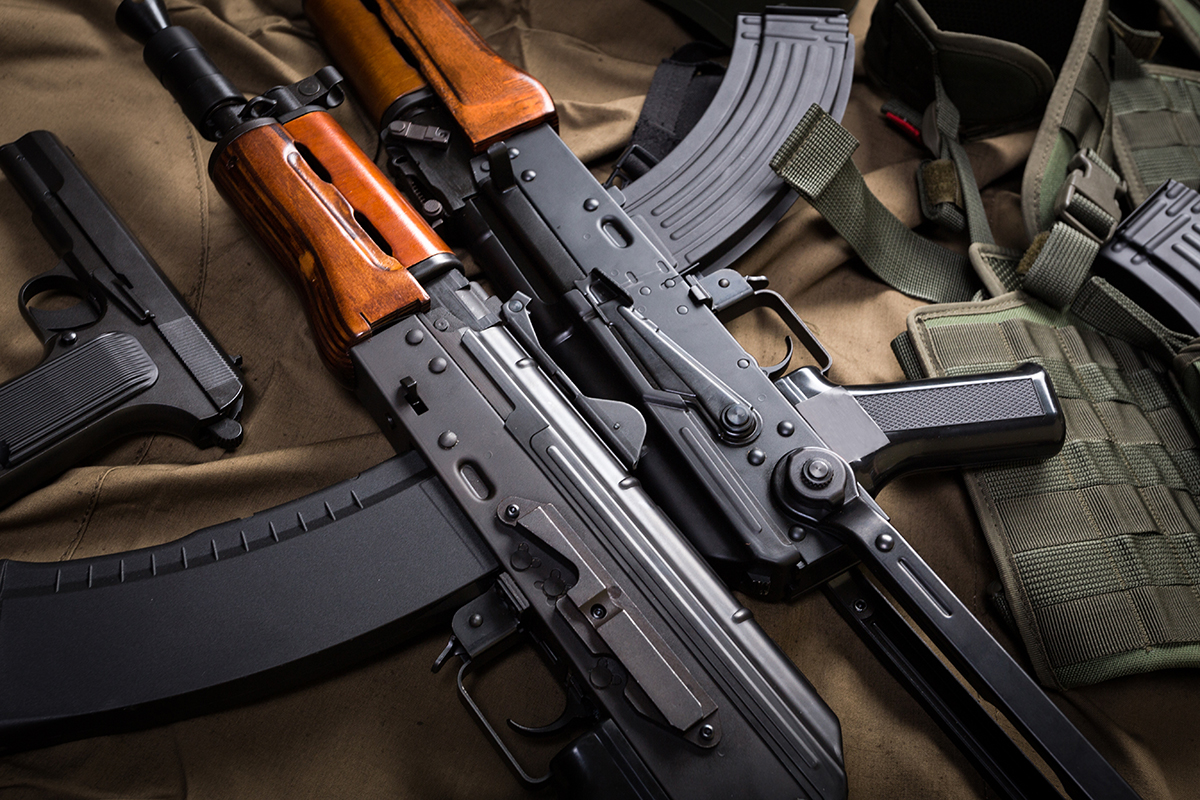 Moving right on up to the big boy rifles, the super infamous, super noticeable and super fun to shoot, AK-47 has been featured in nearly every single movie and video game involving firearms. The AK has been around since 1947. A few films featuring the rifle include Lord of War, Heartbreak Ridge, Hotel Rwanda, and Rescue Dawn. Some video games include but are certainly not limited to, nearly every Call of Duty game; Far Cry 3, 4 and 5; and, of course, Battlefield 2, 3 and 4.

A close second in the realm of rifles comes the popular M-4, or AR-15 variant. Appearing in films such as SEALS, Extraction, John Wick, Lone Survivor, and War INC, the M-4 is a beloved rifle used in many militaries and shooting clubs around the globe. The rifle is featured in a majority of video games that involve shooting, just like the AK-47 or the 1911. It is commonly used in the Call of Duty series.

One that can be picked out of a crowd a mile away for fans of the movie Tomorrow Never Dies, is the FN P90. Created by Fabrique Nationale to come up with a more standard armor piercing round for NATO, this rifle has been used primarily by special forces around the globe. Because of how fast it can fire and the ejection port being on the bottom of the rifle, it looks fantastic and somewhat magical as it fires. Most noticeable use is from the Stargate movie, TV series, and ill-fated video game.

Keeping in line with the full auto machine guns at the range is the Thompson 45, more famously known as the “Tommy Gun”. This rifle was mostly used in World War 2 movies or old school gangster movies such as The Godfather or Scarface, but also appears in films like Once Upon a Time in Hollywood. As for video games, Sniper Elite, Day of Infamy, Mafia III, and State of Decay all use variations of the Tommy Gun.

Bringing it up to “FN’s Family Rifle” The SCAR 16 is right at the top of the list, seen famously in the film Sicario: Day of the Soldado, Inception, and The Losers. The most famous use of the rifle, however, comes from the online video game, Fortnite, as a “legendary weapon”. Because of how well the rifle handles recoil, its firing mechanism and ease of modularity, U.S. Army Rangers adopted this rifle as their standard issue for their 75th regiment, making this rifle one of the top picks when it comes to any video game or movie involving the U.S. military.

Finishing things off with the loudest bang available on this side of the state is the Barrett .50 caliber sniper rifle. Designed to shoot a mile and hit hard enough to stop an engine block in a truck, this rifle will leave its mark in terms of the size and boom it produces, and maybe a little red mark on the user’s shoulder. Used mostly in TV shows such as Mythbusters, Future Weapons and Lock N’ Load with the late R. Lee Ermey, the rifle is featured as being a strong and powerful, yet comfortable, single-shot .50. This popular firearm can also be seen in Ghost Recon: Advanced Warfare 1 and 2 and Spec Ops: The Line.

Even though these famous firearms are seen in movies and TV, it’s still possible to fire all of these and more at LVSC – and even purchase them to take home with you. Contact us at 702-778-5872 to schedule your range time and learn about our firearm inventory.